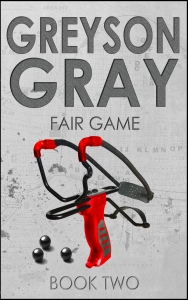 Stopping the terrorists only made them madder. The twelve-year-old secret savior of thousands, Greyson Gray, is given a new identity and forced into seclusion to hide from the Eye of Eyes – the most wanted man in the world and the leader of a rising terrorist group trying to divide the United States. But Greyson can only be secluded so long. Drawn toward suspicious activity at the massive Iowa State Fair, Greyson and his faithful friends uncover a plot even more insidious than before – one that threatens the fibers of the nation and possibly the next president of the United States. For Greyson, everything is on the line – his father’s whereabouts, his relationship with Sydney, and the lives of everyone he loves. With new weapons, a new rival in love, and new enemies, there’s no holding back. It’s all fair game.

Click the links to the right to buy this amazing sequel!

Buy the Book Below!